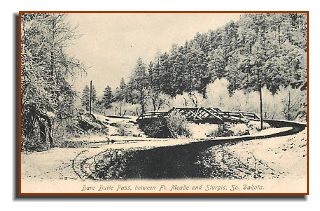 Sturgis, South Dakota, is internationally famous for the Sturgis Motorcycle Rally, which, every August, draws several hundred thousand attendees from all over the globe. Few, however, understand the deep and rich history that the community holds from the time of its founding.

In 1878, surviving elements of the 7th Cavalry, under the command of Gen. Samuel D. Sturgis, established Camp J.G. Sturgis near strategically important Bear Butte. The camp was named after the General’s son who died with much of the 7th Cavalry at the Little Bighorn. This camp attracted a community of “vendors,” who set up with the primary purpose of relieving the soldiers of their military pay by any means possible. This practice was termed “scooping” and the settlement was appropriately called “Scooptown.”

Later that year, a permanent fort was established a few miles south, becoming Fort Meade. “Sturgis City” was almost immediately established a mile and a half west of the fort, this time being named for General Samuel D. Sturgis himself. No longer being in a prime location, the community of Scooptown packed up and moved into Sturgis City, immediately lending its nickname and reputation to the town.

While the early reputation of Sturgis was that of a wild and boisterous community, full of lawlessness and mayhem, the core of residents and business leaders managed to establish the basis of the solid and pleasant community we know today.

You can become a Member or Business Sponsor of the Sturgis & Meade County Historical Society online.

You can also make a valued Donation.

Your support is essential in our efforts and is highly appreciated.